If you live in the US and are a fan of watching movies at cinemas, chances are that you have heard of a company called MoviePass. It is famous for its unprecedented business – $10/month for one ticket every day. The company has suffered a great deal financially and operationally for its business model, including an urgent financing round to keep its servers running, downtimes, unimpressive customer services and frequent changes to its pricing.

In the subscription world, the mandate is that once a user subscribes, the more the subscriber consumes services/content, the better and marginal cost is trivial. Take Netflix for example. After a successful subscription, a user can watch as many movies and for as many times as possible. Netflix takes in minimal marginal costs (probably for servers, storage and networking) for every time a movie is watched. In the case of MoviePass, it’s not the case. Every time a ticket is dispensed, MoviePass pays the cinemas either the full amount of the ticket or the majority of it. Slap on it the cost of marketing, financing and operations and the business loses money.

How does MoviePass make money in that case? I suspect that MoviePass prioritizes growing its user base to the point that it is big enough for the company to convince cinemas to cut its a much better deal. Advertising can be another avenue.

The failure of MoviePass is also from the customer segmentation perspective. We moviegoers differ from one another in our consumer behavior. Some go to cinemas every week, some go for only blockbusters and some only do so once in a while. The difference in behavior requires multiple offerings from MoviePass. The less frequent users don’t feel motivated to keep a subscription every month. Movie junkies who go as many times as possible will bleed the company dry. There are some users who look at the release schedule, subscribe for only one month in which I can watch movies I like and then unsubscribe, myself included. Such users don’t offer much value to MoviePass as they don’t, ironically, consume enough to contribute to MoviePass’s value as a company.

The “one-size-fits-all” model that MoviePass is famous for doesn’t take into account any user behavior. Unsurprisingly, it failed.

Sinemia today announced an unlimited plan. For $30 bucks, users can get a ticket every day and advanced bookings are allowed (not possible with MoviePass). The difference obviously is a higher price tag that comes with the plan. I suspect that even at $30/month, it is still a money-losing deal for Sinemia but it is less damaging than a $10/month plan. Moreover, Sinemia has 5 different plans now. Each appeals to a different segment of users. 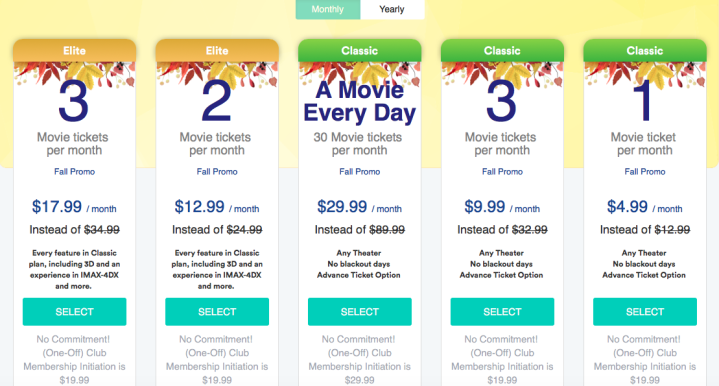 To discourage users from unsubscribing early, Sinemia enforces an initiation fee for monthly-based plans. That way, users care more about the subscription and are motivated to stay longer. If users unsubscribe, Sinemia gets more revenue in return. If users want to avoid the initiation fees, the only way is to be locked in for a yearly bill.

Even though Sinemia has multiple plans and higher pricing points, Sinemia will try to enlarge its user base and leverage it for a better deal with cinemas. What I think will be appealing to cinemas is that Sinemia can prove that it attracts moviegoers in unpopular times during a day. Movie slots are perishable. Once it goes by, there is no way to recover it. Hence, cinemas would be interested in putting butts on their seats during low-traffic hours. If Sinemia can prove that it is able to deliver that, its position will be stronger. Anyway, its business model is saner than MoviePass’.